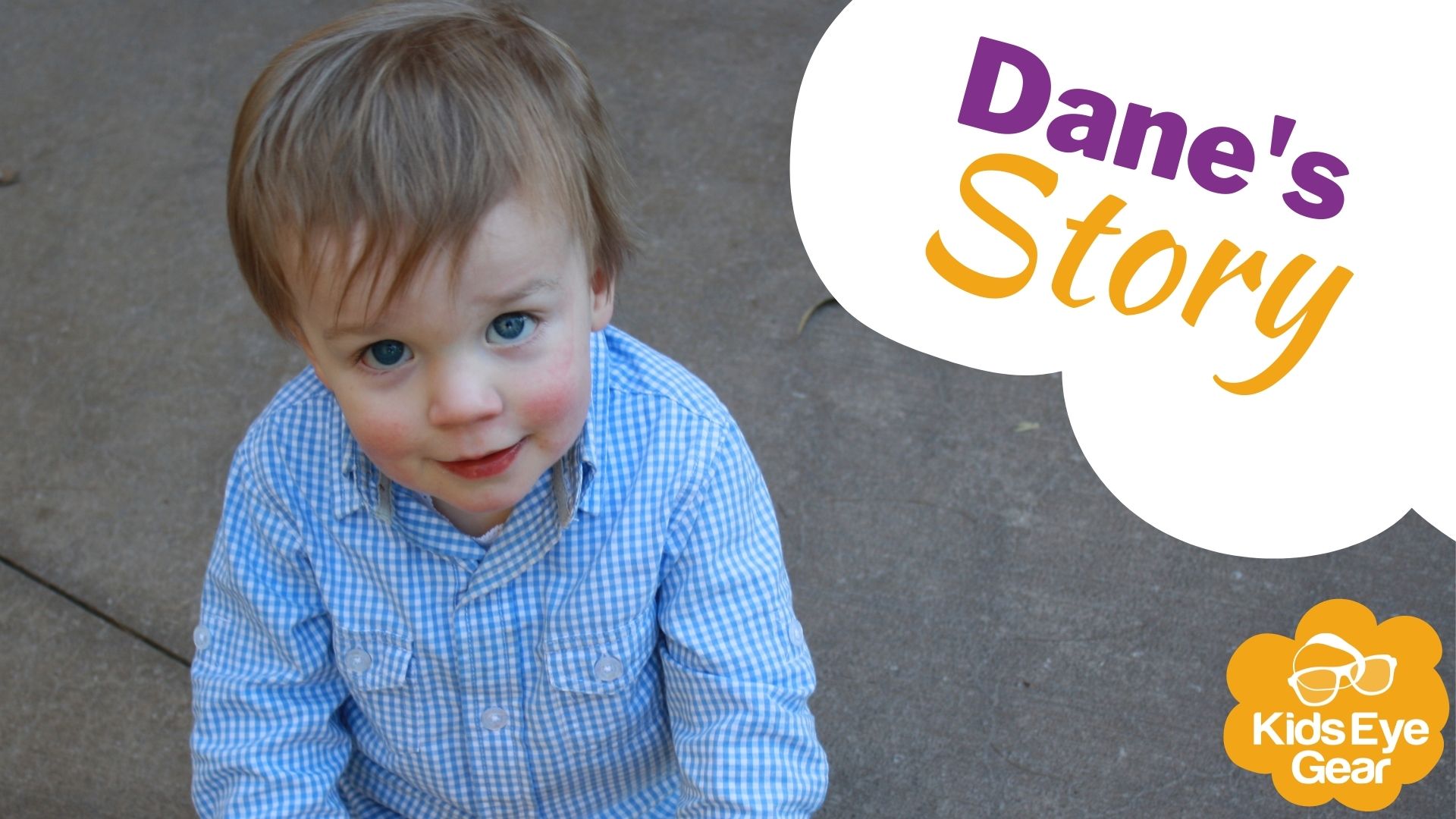 Our story began when Dane was six months old. I took him to the GP to get his immunisations and checkup. It was all very routine until the doctor said she could see something at the back of his eye and asked another doctor in the practice to come and have a look. Whenever a doctor asks another one to come and give a second opinion alarm bells start going off in my head!

So the other doctor looked in his eye and after much deliberation they decided that they could see a clouding on his lens. The doctor told us that it was most likely a cataract but there was a small possibility it was a tumour. Well, that rocked my world and set me into panic mode. We were told if it was a cataract it was a simple surgery to correct and an artificial lens would replace is clouded lens. If it was a tumour…well, to be honest I decided to pretend I never even hear her say the ‘t’ word. So after harassing one of only two privately practising paediatric ophthalmologists in Brisbane, our doctor got us an appointment for 10 days time. Never a good sign to get to see a specialist surgeon so quickly but for us it was an agonising 10 day wait. 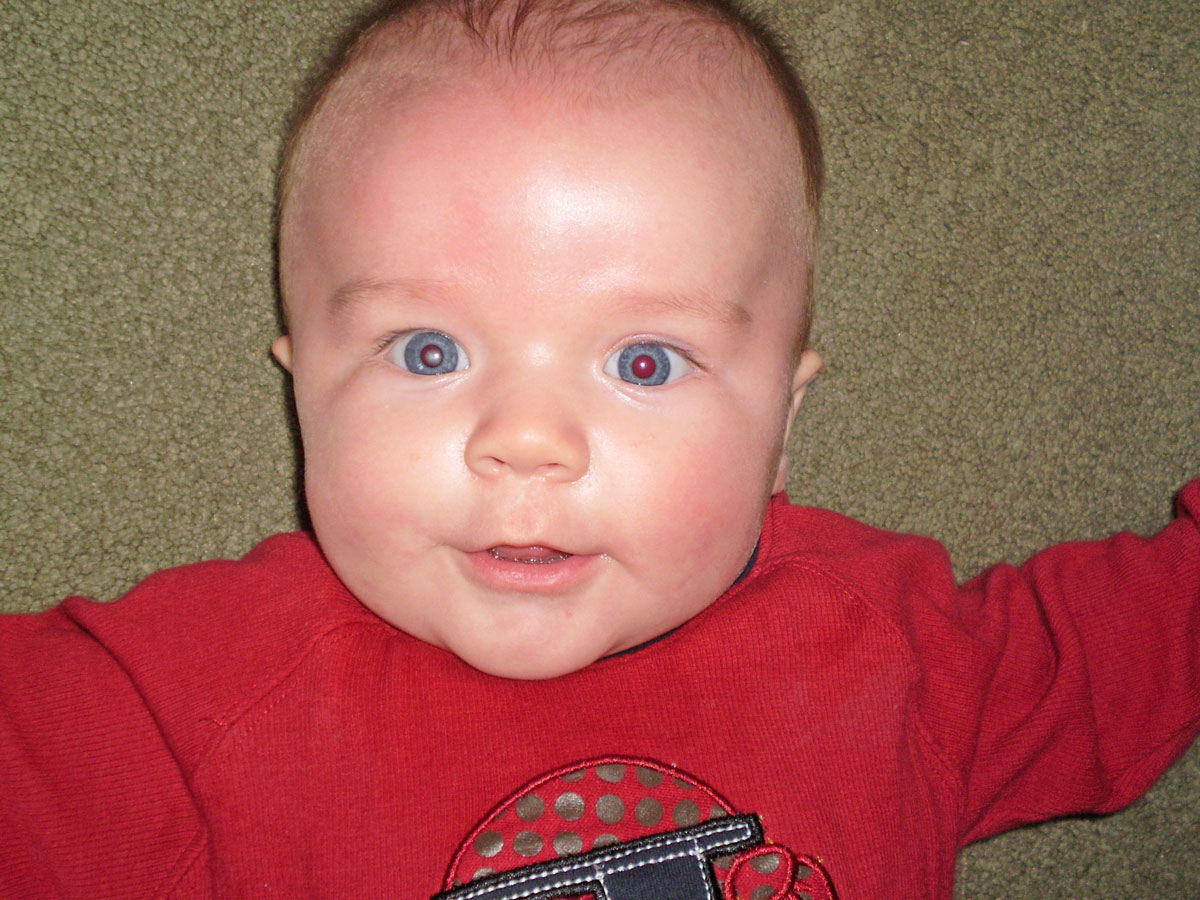 It's possible to clearly see the unilateral congenital cataract in Dane's right eye, he was 5 months old by this stage.

To cut a long and unsatisfying story short, 10 days later the specialist told us that our baby son had a unilateral congenital cataract (so a cataract in one eye that he supposedly had from birth). These are usually picked up and operated on by 6 weeks of age so with Dane now being over 6 months, there was nothing that could be done and he would simply go blind in one eye. This was because the pathways from the eye to brain would have already closed down so there was no chance that even if he had operated, the brain simply wouldn’t be able to create sight. From there his eyeball would most likely not grow so would be smaller than his other eye and he might need a contact lens to make his eye look ‘normal’ (even though he still wouldn’t be able to see, so it would just be for aesthetic reasons). His eye would probably also turn, requiring surgery to make it look ‘normal’. I was in shock but distinctly remember the surgeon telling us that he’d be fine and that plenty of people live with only one eye – he just wouldn’t be able to be a pilot or an ophthalmologist!

Well, after the shock I went into acceptance and thought, ‘well this is what it is, we’ll just have to make the best of it’. There are plenty of children out there that are far worse off and he still had vision in one eye (although he would statistically be at a greater chance of losing vision in his good eye due to an accident). My husband on the other hand did not take it so well. He refused to accept the diagnosis and set about stalking (in a nice way!) the only other paediatric ophthalmologist in Brisbane to get a second opinion. Thank goodness he did.

This new surgeon saw us on two days notice and spent hours with us, going through all the photos of Dane trying to see when the cataract had really started to grow dramatically. He felt that it probably had been there from birth but had only grown large enough to be detrimental to his vision at about 3 or 4 months of age. So he said he would operate if we wanted to but gave us about a 10% chance it would work. Making the decision to go through with the operation was absolutely agonising and the most horrible thing I've ever been through. But we decided to do it.

Fast forward eleven years and we now know that Dane has 6/7.5 (20/25) vision in his 'bad' eye (on a good day he will sometimes get to 6/6). This was the absolute best case scenario that we could have hoped for. We are so lucky.

We still see our specialist every 6 months and he tells us at every visit that the success of Dane's vision is largely due to our commitment to patching him. We started off patching him for all but 2 hours a day for the first year, then all but 4 hours, then a total of 4 hours a day, then only 1 hour a day - and now not at all!

There are still challenges but on the whole, Dane is doing fantastically well.